A Senior Administrative officer and former Governor, now a renowned author, has unpacked an avalanche of trends that Public Administration in Cameroon continues to grapple with.

Abakar Ahamat, whose service in public administration spans 32 years, unveiled his latest editions of books titled: “Crowned Incompetents and Relieved of his Duties, during a press briefin held on 23rd February, 2021, under the auspices of “Editions de Midi” based in Yaounde, Cameroon.

The two books presented to Journalists are his 6th publication.

In the book titled: “Crowned Incompetents” the writer gives an overview of why people are treated as just competent to mislead and why they are well dressed and yet are in the nude?

Abakar Ahamat brings in the Peter Principle which states that: within every class system, every employee, unfortunately has a tendency to rise and reach his incompetent level; The Dilbert Principle which affirms that the least skilled people are systematically assigned to posts of responsibilities where they may cause the least damages; The Murphy’s Law which states that: in the life cycle of administration, functional structures and other hierarchical institutions, every individual comes fatally one day to his highest level of incompetency mitigating the impact of the reality that only the most incapable officiate at the highest levels of a given hierarchy.

The seasoned Senior Administrative Officer told media practitioners how his career was enriched by various experiences and challenges from a simple collaborator of a Governor, Divisional officer, Secretary General, Senior Divisional officer and Governor.

Retired since 2015, the former Governor has acknowledged that he learnt from some competent officials and faced a lot of challenges.

“It is a reality that exist in our administrations and which might not be really perceptible. Yet, people complain of incompetency and incompetent agents who are appointed to top positions for no reasons. There are reasons behind such appointments, recruitments which are done on unclear basis and which lead to such incompetency. That is what I describe in my book “Crowned Incompetents” said the author.

While in the book titled: “ Relieved of his duties”, Abakar Ahamat portrays the anxiety of citizens waiting for appointments on radio and other news channels, the festive and popular aspects that have to do with appointments, the deadly pleasure of senior divisional officers and so on.

In fact, as underscored by the author during the press conference, the book shows the real face of our society.

Abakar Ahamat outlines that, when relieved of his duties, a manager who was applauded and appreciated suddenly becomes a real scarecrow, a dreaded horror. Everyone, including his former colleagues and collaborators run away from him as if they were afraid of being contaminated by the dirt and stain which in their eyes, he seems to carry or bear. 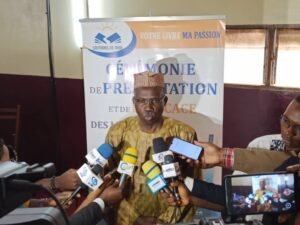 Another point portrayed in the book by the author are the sanctions inflicted to several civil servants or agents of the public service who cannot justify themselves or whose sanctions are publicly read without any reason granted. Most top officials are victims of pressure mounted on them by some networks and resisting to them appears at the end to be fatal.

He said: “No one grants extenuating circumstances to the victim of the “Relieved of his duties” bomb; no one imagines that the said person can be a victim of an error of judgement and an error of assessment, of procedural error of a network of scores settling. However, this happens, unfortunately frequently. The pressure from networks are such that, generally; to please or to access these insidious requests, the blacklisted individual is first punished and could, if luckily enough, be investigated afterwards and rehabilited if necessary.”

According to the writer, the books propel the bad and good sides of the administration in Cameroon thereby highlighting some loopholes, gaps that need to be filled in by decision makers.

The writer says his books are not only out to castigate but to inform many of several unknown ill practices which populations are subjected to, as well as the different challenges administrative officers are faced with in the course of their duties in some areas of the country.

In his books written in French and then translated in English, Abakar Ahamat shares most of his best practices as a civil servant who has occupied from 1983 to 2015 different posts in the territorial administration.