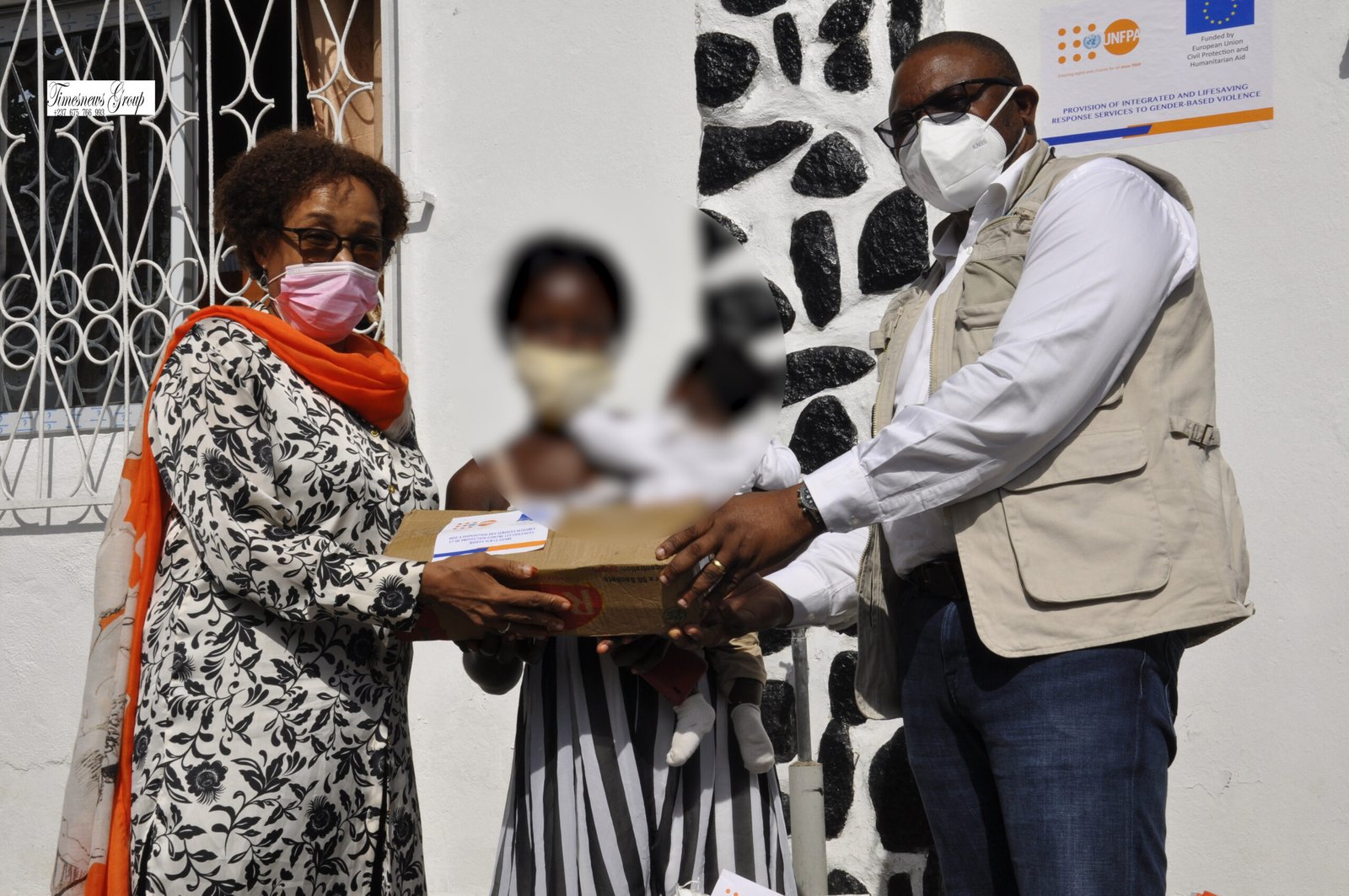 The field mission that took place from October 18 to 22, 2021 was aimed at monitoring and assessing key activities carried-out so far within UNFPA’s humanitarian and life-saving gender-based violence project launched in December 2020 in the North-West, South-West, Littoral and West regions.

The project running till April 2022 grants support to vulnerable women and young girls affected by the current Anglophone crisis which has crippled the North-West and South-West regions of Cameroon. And therefore causing massive influx of internally displaced persons (IDPs) in neighbouring regions of the country notably in the Littoral and West.

UNFPA’s country Representative Siti Batoul Oussein alongside ECHO’s team led by Serge-Tigwende Soubeiga have been at the helm of the delegation of humanitarian staff in various meetings and activities undertaken in the Littoral and West regions.

The team’s journey began in Douala with series of in-depth discussions. They met with Regional Delegates from key ministries concerned by the project. The humanitarian team had a clear view on how the project is running and how to fill in the gaps in the next stages.

Amongst top officials met in Douala by the team of Siti Batoul Oussein is, Littoral’s Governor, Samuel Dieudonné Ivaha Diboua who showed a lot of interest in the life-saving project.

He took advantage of the meeting to expose the galloping rate of needs of IDPs and portrayed the situation in which many live in host communities of Douala.

Yet, with the financial support of the European Union through ECHO, the project has so far brought a lot of positive changes in the lives of many survivors. Many young girls and women affected by the ongoing crisis have benefitted from case management in safe spaces, psychological first aid support, medical as well as mental health care as underscored by UNFPA.

The visible side of this project in Douala was witnessed at the Baptist health centre situated in the Mboppi neighbourhood, where dignity kits and COVID-19 items were handed-over. And at the Martin Luther King Junior memorial foundation (LUKMEF) safe space in Bonaberi which welcomes GBV survivors, close to 15 women and young girls were donated goods their economic autonomy.

Beatrice, mother of 6 children who has resettled in Douala due to threats of the crisis in the North-West has regained confidence in herself thanks to the project as she said.

“Since I came from Bamenda, I have been suffering here in Douala with my 6 children who are fatherless. I lost hope in life but through a sensitization carried-out by LUKMEF which I heard, this is how I came in contact with this centre. When I came here I was followed-up. I have learnt many things like the fabrication of soap. This has helped me to start a petty business for my family. And today with the package received from UNFPA, I thank God. I will start selling fish in the market because they told me apart from rice there is fish in the bags…”

Just like Beatrice, many beneficiaries expressed happiness and joy for the goods received officially from the hands of Mrs Siti Batoul and UNICEF’s deputy Representative, Arsene Azandossessi.

The UNFPA country Representative seized the opportunity to boost the morals of GBV victims and said much more incentives are underway.

“I just met one who is 14 year old pregnant by force, which is very heart-breaking to see. So, seeing the joy and smiles on their faces, means that they went through the support that has been put in place by the project. I mean the psychological and medical support put in place for them to be a group of survivors. They are survivors, they strive to become the women they are. As I was telling them; stay as you are, get strong, those who are pregnant look for services you expect around here and provided by the project, they can refer you to where you can get the medical services or psychological support etc.” She said.

In Bafoussam, West region, the humanitarian team carried-out the same exercise at the regional hospital where sets of reproductive health kits were granted.

The tireless visitors met with the patron of the region, Governor Awa Fonka Augustin in order to get a grasp on the situation of IDPs and host communities.

To end their four day tour, the staff from the UN agencies later on commune with GBV survivors sheltered at the safe space of COMINSUD. Goods were granted to the women and young girls as a move to give them hope and begin a new life in spite of the continuous services rendered by the project.