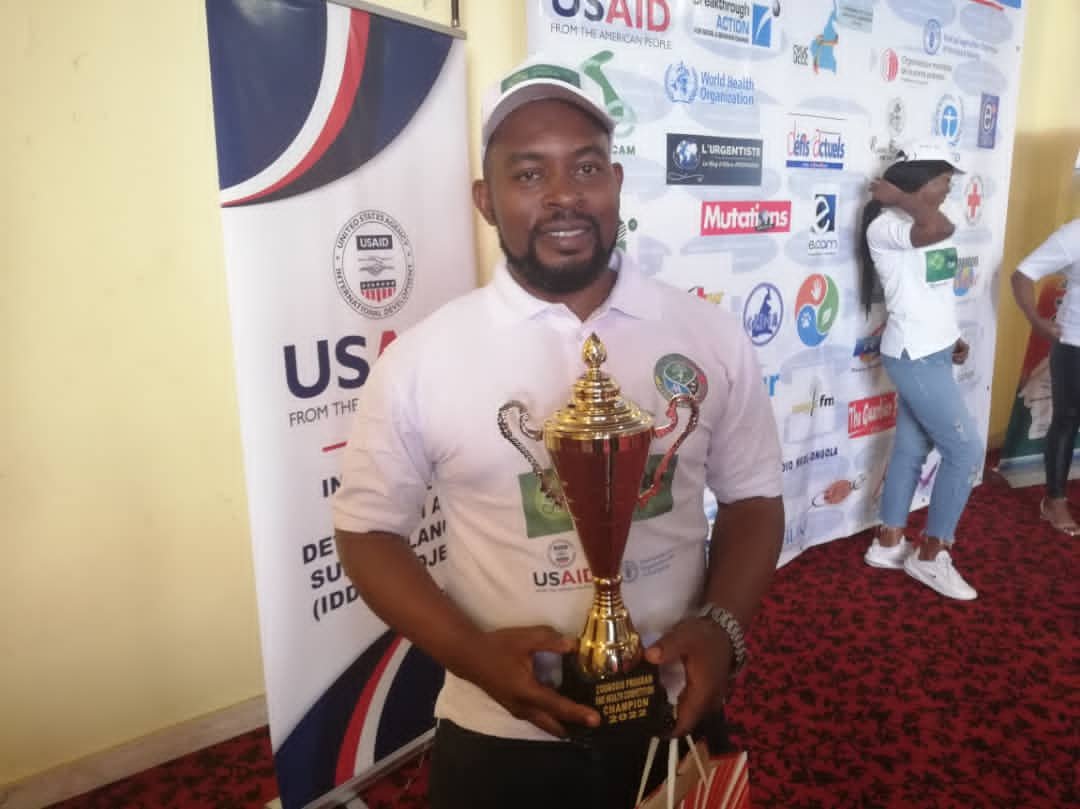 The reporter and blogger, publisher of online media « News Upfront » was champion of a National Competition organized among bloggers.

Over forty (40) bloggers from across the country participated in this year’s edition of the ‘One Health’ contest. Five (5) were chosen by the Jury for the semi-final, and three of them qualified to the final.

« It was challenging, but we thank God for seeing us through », Louvier Kindo Tombe, 2022 ‘One Health’ Ambassador said.

« As Ambassador, I have to make it a duty to see that the community, and health experts embrace the concept », Louvier Kindo said.

We live in an era where in almost every household, we find animals and humans together, and their health interconnect and depends on the environment they live in. Human activities such as deforestation equally contributes to bring animals and humans together. Climate change effects provoke environmental hazards that affect food security and safety. These are vices that may change, and the ‘One Health’ Ambassador thus comes in to play.

« We, humans are at the center of these activities, and a change of mentality will go a long way to play the magic », says Louvier Kindo.

« Health workers must learn to collaborate in the quest for solutions to common threats that affect both humans, animals, and the environment », he continued.

The ‘One Health’ competition was organized by the National Program for the Prevention and Control of Emerging and Re-emerging Zoonoses in Cameroon, under the Ministry of Public Health.

« We are proud of what the bloggers are doing for ‘One Health’, and we hope to collaborate with them to achieve great things together », says Dr. Conrad Ntoh Nkuo, Permanent Secretary of the National Program for the Prevention and Control of Emerging and Re-emerging Zoonoses in Cameroon.

The ‘One Health’ concept summarized an idea that had been known for more than a century; that human health and animal health are interdependent and bound to the health of the ecosystems in which they exist. We envisaged and implemented it as a collaborative global approach to understanding risks for human and animal health and ecosystem health as a whole.

Cameroonian One Health strategy was launched in 2013 with the development of a program for the prevention and control of zoonotic diseases. Today, the Committee has successfully delivered two documents: the National One Health Strategy chaired by the Prime Minister with 11 ministers as members and the National Program for the Prevention and Control of Emerging and Re-emerging Zoonoses, which is part of the implementation of the One Health strategy.

The ongoing program covers the surveillance of diseases in wildlife, prevention, and control of rabies, capacity building for the detection and risk analysis of zoonoses, and integrated rapid response systems.

The goal of One Health Day is to build the cultural will necessary for a sea change in how planetary health challenges are assessed and addressed and how professionals exchange information across disciplines. One Health Day brings global attention to the need for One Health collaborations and allows the world to see them in action.

The ‘One Health Day’ campaign is designed to engage as many individuals as possible from as many arenas as possible in One Health education and awareness events and to generate an inspiring array of projects worldwide.