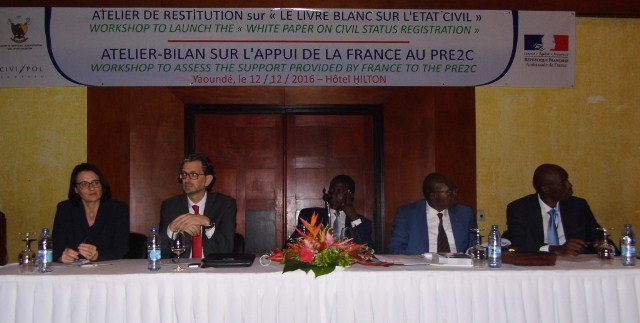 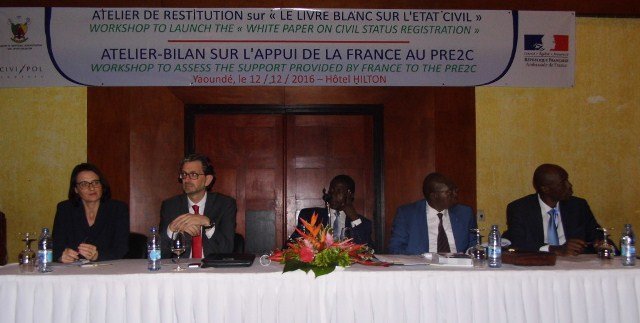 The « white paper on civil status registration » has been presented this December 12, 2016 in Yaounder during a workshop to assess the support provided by France to the Cameroon civil status rehabilitation programme.

Composed of 439 pages sequenced into 18 chapters, the book dubbed : « white paper on civil status registration » has been presented to key actors involved in the civil status registration process in Cameroon. The presentation made in Yaounde at the hilton hotel, during a workshop chaired by Pierre Essomba, Secretary General in the Ministry of terrritorial administration and decentralisation follows a series of training and awareness raising sessions organised nationwide. Stakeholders involved in the civil status registration, problems and issues raised by participants helped to identify themes which deserved an in-depth consideration. As part of the cooperation between the Government of the French Republic, that of Cameroon and CIVIPOL Conseil, it has been revealed that the support which just ended , was contracted to carry out a support mission on the Cameroon Civil Status Rehabilitation Programme(PRE2C) centered around five sub programmes. The said programmes targetted were : data collection, legal and institutional reforms, awareness raising and training of key actors of the civil status, investment, supplies and computerisation. All these activities were carried out in three years with a total financing of 2 Million Euros.
The balance sheet of these activities was underlined in the white paper on civil status registration as follows: training of civil status registrars and clerks : 90 training sessions, in 74 different localities from October 2015 to February 2016 ; awareness raising of representatives from the Ministries of Health, Basic education and Justice ; assimilation seminars with members of parliament- with the Yaounde school of citizenship and politics spearheaded by Honorable Vincent de Paul Emah Etoundi on April 2016 ; sensitization of the population through film projections on civil status (with the digital mobile camera in 100 rural localities in Cameroon) followed by debates from March to July 2016 ; National Civil status registry forum in June 2016 ; Appropriation seminar of the new law on civil status for the staff of the Ministry of external relations in October 2016 ; Capacity building seminars for the staff of BUNEC (national office of civil status) in November 2016 and the capacity building seminars for the Division of political affairs’ personnel of the Ministry of territorial administration and decentralisation in November 2016.
CIVIPOL Conseil’s expert Karine Sahli-Majira while speaking to the press outlined the fact that since the reform of the civil status registry in Cameroon in 2006, France has accompanied the government to accelerate the pace notably with financing made in 2012 and 2013. As the project ends, we can therefore note the engagement of France in the architectural studies for the construction of the main office of BUNEC, architectural studies for the construction of secondary centers, 8 secondary civil status centers have just been constructed in some targetted and enclaved zones of Cameroon, the financing of 65.000 registers which are most often needed in secondary civil status centers, strategies are underway for the equipment of secondary civil status centers, the production of manuals in english and french on civil status training have been released just to name this few.
The sensitization campaigns though carried out during the various trainings have paced up the success but still need to be reinforced by the Ministry of territorial administration and decentralisation together with BUNEC.