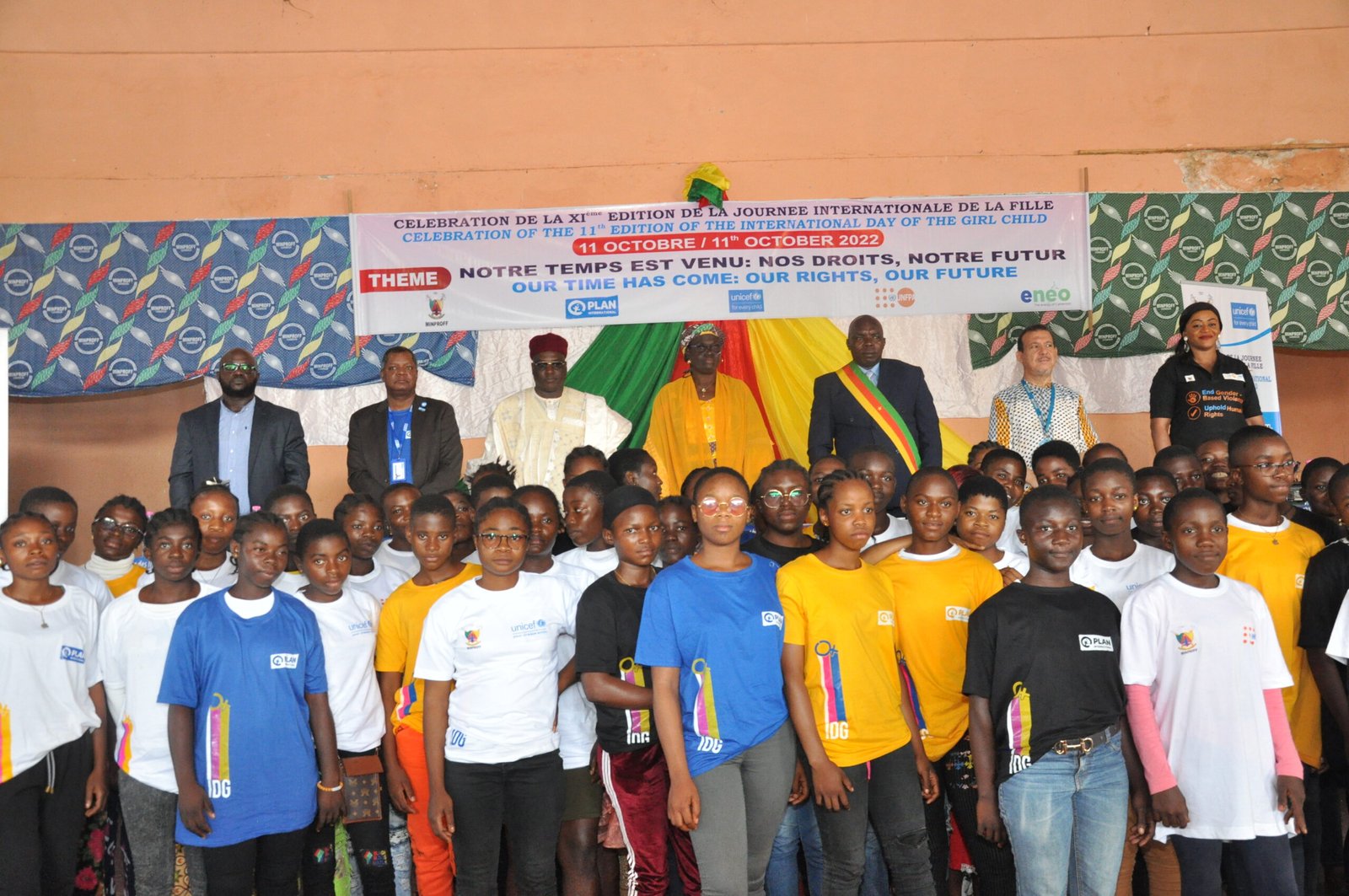 Activities to mark the 2022 international day of the girlchild on October 11 were officially celebrated in the locality of Esse, Centre region, under the auspices of the Ministry of Women’s Empowerment and the Family and Plan International Cameroon.

This year’s celebration marked the 10th anniversary of the international day of the girlchild, IDG also known as the day of girls under the theme:“ Our Time is Now: Our Rights, Our Future. ”

As the theme of this year indicates, girls are deprived of their basic fundamental rights even after strides made by governments and decision-makers worldwide.

This is the reason why, Plan International Cameroon organized on October 11, 2022, ahead of the official celebration in the town of Esse, a girls’ forum with students of some high schools.

The two-hour forum focused on open discussions on important issues such as menstrual hygiene, Gender-Based Violence, Early pregnancies, drug consumption, female leadership, and the responsible use of social media.

The young girls and boys gathered at the cultural palace of the town of Esse were schooled on the rights by Plan International Cameroon and its different partners who were convened for this celebration of the girlchild.

Laurna Stecy Mbeti Mbeti, a form 4 student at the government bilingual high school of Esse is conscient of her rights as a young girl.

13 years old Laurna Stecy, seized the occasion of this celebration to join her voice to that of her age mates who called on the government to intensify sensitization campaigns that will upgrade the knowledge of young girls about their rights and to make them conscient of the crucial role they will play in the future.

During the girls’ forum, children were presented some role models from the energy supply company, ENEO who schooled both the boys and girls on the importance of education.

The official celebration which kicked off in the midday was chaired by Mrs. Koukreo Wespa Maipa, Inspector number 2 in the ministry of women’s empowerment and the family alongside the Country Director of Plan International Cameroon, Mr. Bien-Aimé Johnson and other representatives of key partners like UNICEF and UNFPA.

In his key address, the Country Director of Plan International Cameroon, Johnson Bien-Aimé pointed out some relevant issues affecting the girl child in society notably with the advent of information and communication technologies which have caused more harm than good.

The Boss of Plan International in Cameroon castigated the depravation of social ills, the constant harassment, and the abuse of young girls who are exposed in particular on social media. Despite the positive impacts of social networks on the development of a nation, Mr. Bien-Aimé believes some mechanisms should be put in place to protect the girl child.

He said: “Urban development and access to new forms of information and communication technologies have led to changes in some social values. Both girls and boys are now exposed to new lifestyles and practices that contrast with traditional habits and beliefs. In recent months various adolescents have been exposed to sexual exploitation online (Facebook in particular). Within this context, the community stakeholders, We all are accountable for the deterioration of girls‘ protection mechanisms, which contributes to their limited access to civil rights and decision-making spheres. ”

The same call was made by Mrs. Koukreo in her speech. As a mother, she called on all boys and girls to be wise when using social media. She advised young girls of Esse to think of school first and focus on their education than spending time chatting with boys and men on Facebook or WhatsApp.

According to the Country Director of Plan International, despite the implementation of goal number 4 of the 17 Sustainable Development Goals, the number of children particularly girls enrolled in preschool dropped by 7.2% in 2 years due to the crises in the North West and South West region, and the enrollment of boys is higher than that of girls nationwide as indicated by the ministry of basic education in the 2020/2021 data analysis school census.

Apart from the fact that these relevant statistics unveiled are due to the crisis rocking in the North West and South West region, Mr. Bien-Aimé Johnson advocates for new incentives which will help increase the number of girls in schools.

In the same line, the Representative of the Minister, Mrs. Koukreo insisted on the fact that families and the community should understand the important role of a girl in society tomorrow.

“Girls should not be left at home to the detriment of boys. Parents should invest in the girl child as they do in the boys…” She said.

She said to tackle such ills, the government has emphasized five key transformative priorities which are: ending early and forceful marriages; fighting against Gender violence; advancing the education of girls at the secondary level; pacing up the nutritional, sexual, and reproductive health of girls and facilitate the management of menstrual hygiene.

The celebration of the international day of the girl child in Esse was equally an opportunity to take stock of the different actions carried out by Plan International Cameroon which strives for the advancement of children’s rights and equality for girls.

The Country Director unveiled in his address, the numerous activities carried out by his organization throughout the year with an accent on multiple sensitization campaigns with young girls and boys targeting the ten regions of Cameroon.

“We have had activities around sensitization on girls’ and women’s rights through round tables, workshops, and discussions; Educative talks on the theme “Equal Power Now”. In the East region, we are engaging girls to discuss with leading female politicians. In the Far North, girls are taking the lead in important positions such as Delegates and Mayors; in the Littoral, North West, and South West regions, girls are mobilizing to formulate demands towards duty bearers and community leaders requesting more spaces to participate in decision-making spheres. ”

Mr. Bien Aime cited other relevant actions carried out from July 2021 to June 2022 by Plan International Cameroon with the support of the government.

“Plan supported some 3.585 (1,850 girls, 1,735 boys) refugees children living in the Yaoundé and Douala areas who are enrolled in primary and secondary schools. Some 193 persons (23 girls, 07 boys, 125 women et 38 men) were trained on saving Groups functioning and 131 persons benefited from the support. Plan International Cameroon significantly contributed to stimulating the adoption of a National Code for the Protection of Children Online through a powerful « Takeover » (#FreetoBeOnline) organized with the Minister of Post and Telecommunications (MINPOSTEL). Thanks to the contributions of the advocacy actions, the Ministry led the development of the National Code for the Protection of Children Online, and Plan International actively collaborated in the review of the Code. The Code has been submitted to the Prime Minister’s Office for action. The total number reached through our programs in 2022 was 160.692 girls below 18 years. ” He added.

The 2022 edition of the IDG in Esse was equally spiced up by the donation of menstrual hygiene kits to young girls and sewing machines to some recently graduated trainees of the center of women’s empowerment and the family.