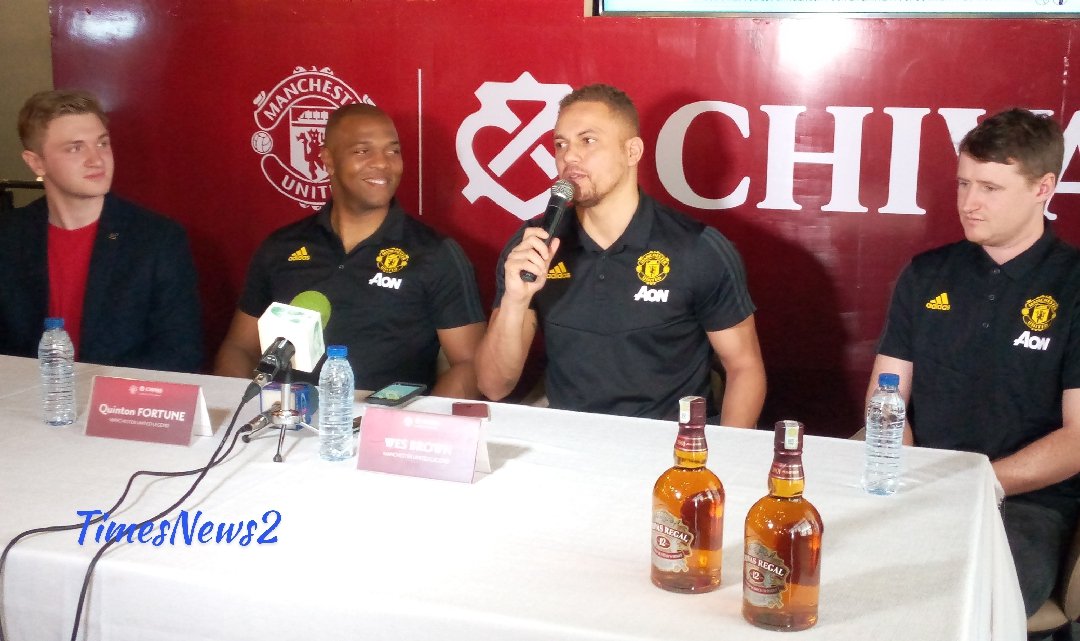 Former Manchester United football players, Quinton Fortune and Wes Brown have been associated to the ongoing Chivas Afroblend tour campaign.
The two prominent footballers alongside Jamie Hamilton, brand Ambassador of Chivas Regal, granted a press conference on Saturday March 7, 2020 in Yaounde, Cameroon.
Chosen for their exciting and rich careers with the english renown club, Manchester United, both players were invited to Cameroon to commune and share with their fans and consumers their experiences in a special Chivas Regal event.
The stars of Manchester expressed their respect for Cameroon with regards to former players like Roger Milla and Makanaky Cyrille who inspired them later on in their football careers.
« Invest in young people for the development of football in Cameroon could be of great advantage for Chivas Regal which I believe is doing that. Cameroon has amazing talents. Because of Cameroon, I started imagining myself as a young player in South Africa » said Quinton Fortune.
Taking stock of their career, they have shared some of their best practices on the pitch and have encouraged young footballers  to work, there is no magic in sucess.
Wes Brown said all resides in hardwork : «You have to start a young age.The more you practice, the more it helps. Alot of practice will bring you sucess just like the Chivas and Manchester. »
A football player has to look into his nutritional habits. The type of meals and drinks he takes. And because we look forward in quality products that is why we consume quality products like chivas said former players of the red devils.
During the session with the media, much was equally highlighted on the existing partnership between the whisky and Manchester United football club since 2018 and also the quality of the product.

According to Jamie Hamilton whisky is like football with a blend of talents. «When you look at the teams of Manchester United from 1999 to 2008, there is a variety of talents and competencies with differents tools to win ».
Brand Ambassador of Chivas Regal, Jamie is in Cameroon for the three months in abid to help consumers appreciate the quality of the first scottish whisky, Chivas regal.
The Chivas Regal event held at Famous Snack restaurant in Bastos brought together various consumers in Yaounde under the coordination of communication and marketing consulting agency We’ll Done.
Created on December 2014 in Douala, Cameroon, We’ll Done is a professional agency managed by communications’ expert Marion Obam Mahel.