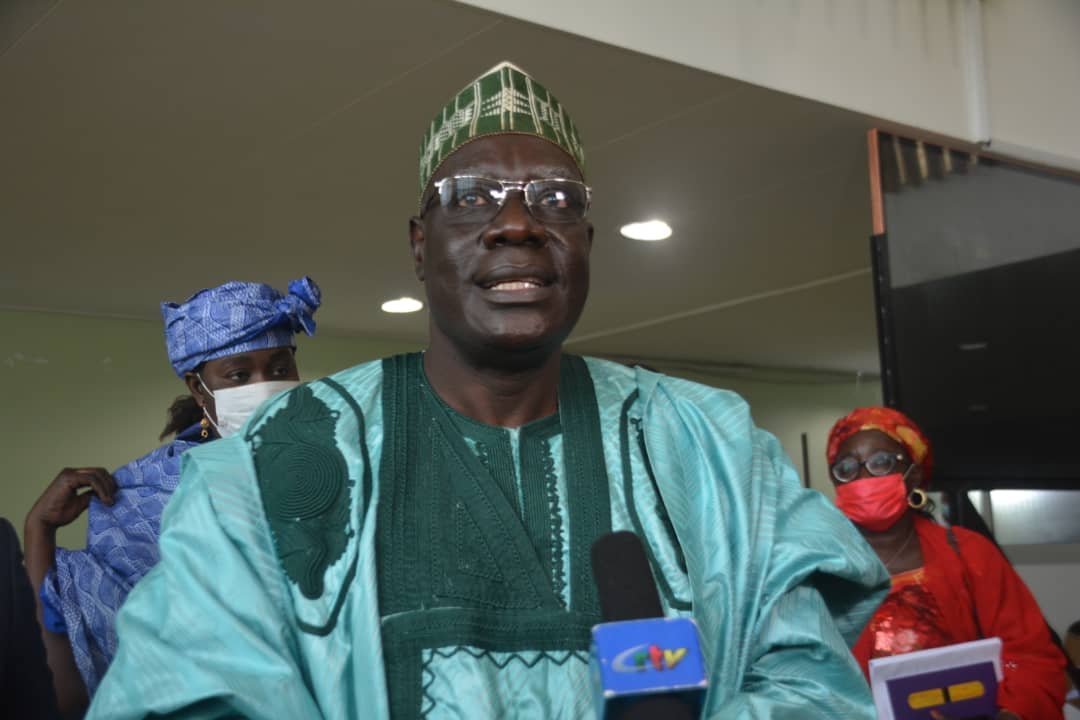 Mounouna Foutsou Minister of youth affairs and civic education defended on Thursday 2nd of December 2021, the draft budget of his ministerial department.

The patron of youth affairs and civic education in Cameroon, Mounouna Foutsou appeared before the finance and budget committee of the national assembly on Thursday 2nd December 2021. The Minister presented to the team of Rosette Ayayi Moutymbo, the various highlights that constitute his draft budget for the 2022 financial year.

Mounouna Foutsou said for the 2022 exercise, his ministerial department has been attributed the sum of 23 billion 702 million Francs CFA. He outlined the fact that his budget has witnessed an increase thanks to activities linked to the Three Special Youth Plan (TYSP).

While speaking before members of the finance and budget committee, the Minister Delegate incharge of relations with assemblies, Bolvine Wakata, the Secretary General of the national assembly, Gaston Komba and other officials of the ministry of finance, Minister Mounouna Foutsou said activities in 2022 will be based on four strategic programmes that have been reconfigured to match with the 2020-2030 National Development Strategy (NDS30).

Minister Mounouna Foutsou said: “For the newly implemented programme 144, Civic education and Volunteering, we mainly intend to ensure: the continued intensification of the national campaign for civic education and national integration, as part of implementing the National Civic Education Programme through Moral, Civic and Entrepreneurial Rearmament (PRONEC-REAMORCE), in schools, universities, out-of-school and socio-professional settings; the dissemination of Law No. 2021/015 of 9 July 2021 to lay down the organisation and promotion of volunteering in Cameroon among the structures hosting public and private volunteers, civil society and especially decentralised communities, while building the voluntary commitment of young people and increasing the number of volunteer opportunities; the continuation of the operationalisation of the National Civic Service Agency for Participation in Development. To achieve these major outputs, the total budget requested for this programme is 6 billion 269 million 652 thousand FCFA including: 4 billion 709 million 200 thousand Francs for operations and 1 billion 560 million 452 thousand Francs for investment…”

Other key activities in which the ministry of youth affairs and civic education intends to embark are plethora as underscored by the Minister. The Head of youth affairs in Cameroon stressed on the fact that, his ministry will carry-out numerous several socio-economic actions within the framework of its programme 145 and these include amongst others: the increase of the the social and economic integration of urban and rural youths, notably those in DDR centres and prison facilities, through appropriate support; the viability of the number of businesses created by young people supervised in various MINJEC structures and programmes; the substantial increase in the offer of local supervision structures for young people nationwide through the construction of about twenty new Multipurpose Youth Empowerment Centres (MYEC) and the accompaniment of diaspora youths through the Support Programme for the return and integration of Youths of the diaspora known as PARI-JEDI.

The ministry of youth affairs will alongside the implementation of its various activities, will equally revamp some institutional bodies under its chairmanship, like the Cameroon national youth council and pursue its support to other partnering bodies.

In 2021, the ministry of youth affairs and civic education led by energetic and devoted Minister, Mounouna Foutsou has implemented a good number of actions as observed by many on the field and has positioned itself amongst outstanding ministries with key results.

Through the implementation for instance of the TYSP, MINJEC has registered close to 31,242 young people with the national youth observation digital platform, and the production of 35000 biometric youth cards as against the issuance of 42,125 receipts. Added to this palpable results are: the development of 73 Pioneer villages, 33 economic clusters with the financing of 1,129 youth projects supported jointly with other ministerial departments.