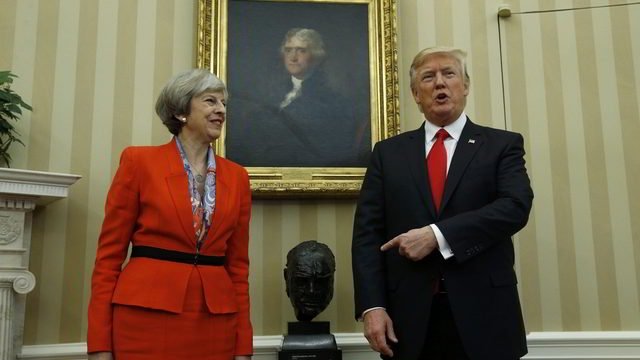 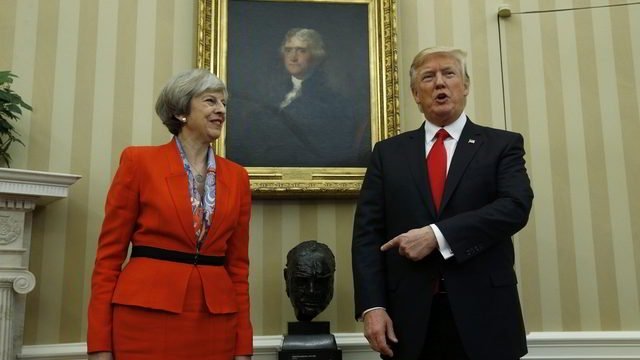 Prime Minister Theresa May is holding talks at the White House with US President Donald Trump.

Donald Trump and Theresa May reaffirm commitment to Nato after White House talks. This is the main information released by BBC news after both officials granted a crucial news conference.They posed for photographs in front of a bust of Sir Winston Churchill – which Mr Trump pointed to, saying it was « a great honour » to have it back.

The new president had the bust restored to the Oval Office after it was removed by former president Barack Obama.
Mrs May smiled and told him: « Thank you, we were very pleased that you accepted it back. »
They will spend about an hour together during the first visit by a foreign leader since Mr Trump became president.
Strengthening US-UK ties, trade and foreign affairs are likely to be high on the agenda.
Although the UK cannot begin to negotiate trade deals until it leaves the EU, Mr Trump has said he wants a « quick » deal after that.
Chancellor Philip Hammond stressed the UK would abide by EU rules on trade talks, when he arrived in Brussels for talks on Friday.
« Of course we want to strengthen our trade ties with the very many partners we have around the world but we are very mindful of our obligations under the treaty and we will follow them precisely, » he said.
Mrs May laid a wreath at the Tomb of the Unknowns at Arlington National Cemetery ahead of her talks with President Trump.
In a speech to US Republicans on Thursday, Mrs May said she wanted to « renew the special relationship » between the UK and America.
She said the two countries « must always stand up for our friends and allies in democratic countries that find themselves in tough neighbourhoods too », to applause from her audience.
But she told US Republicans the UK and US could not return to « failed » military interventions « to remake the world in our own image ».
Tony Blair’s former chief of staff Jonathan Powell said Mrs May « seemed to contradict herself » by warning against foreign intervention, but then saying the US and UK must uphold their values around the world.
He said « it would be a mistake to encourage Donald Trump to be isolationist » when he was already talking about « America first », he said.