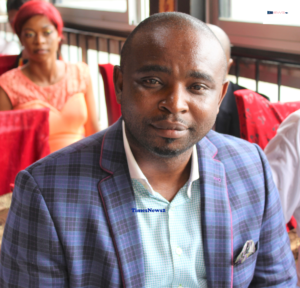 He won with 126 votes against 92 for Moki Charles Linonge in a tight and tense election process.

Out of 219 people who cast their ballot, 126  voted for Viban Jude permitting him to secure the top position as the new national president of   the Cameroon Association of English Speaking Journalists (CAMASEJ). He defied his main challenger, Moki Charles Linonge, acting president of the Douala chapter who got 92 votes. 1 vote was cancelled during the counting process because of its non-respect of the rules according to the electoral commission put in place by the general assembly.

The Elective General Assembly of CAMASEJ held on November 30,2019 in Douala had as major outcome, the vote of a new national president to replace Simon Lyonga.

The six chapters that currently make up CAMASEJ were all present. Douala, the host chapter, Yaounde, Bamenda, Buea, Limbe and Kumba.

Despite tight tension and contests that arose during the verification of lists, the various  members came to a compromise and the elections were conducted in a serene atmosphere.

Viban Jude, the Yaounde chapter leader, now national president of CAMASEJ in his key address after victory, called for solidarity and collaboration among each other.

« I promise on behalf of the team that we are going to work with everyone because we are all talented. We are counting on each and everyone of you to revamp this association. It is no more an issue of an individual. No Viban Jude, No Moki but CAMASEJ »

Viban Jude as declared in his manifesto days ahead of elections, will work closely with his team to organize annual conventions that will bring together all english speaking journalists inorder to chart on ways of improving the practice, protecting and promoting the Anglo-Saxon style.

He intends to promote and raise CAMASEJ as a member of global networks that advocate for press freedom, access to information and the Rights of journalists. CAMASEJ will equally become a member of the international federation of journalists(IFJ).

The team of the new angle  is expected to work on the unhealthy working conditions of journalists in Cameroon notably those of the private sector having most of the time less or no month pay.

The elective general assembly of CAMASEJ was coloured with remarks from Ntumfor Barrister Nico Halle and Franklin Kiven of the United Nations Human Rights’ office.