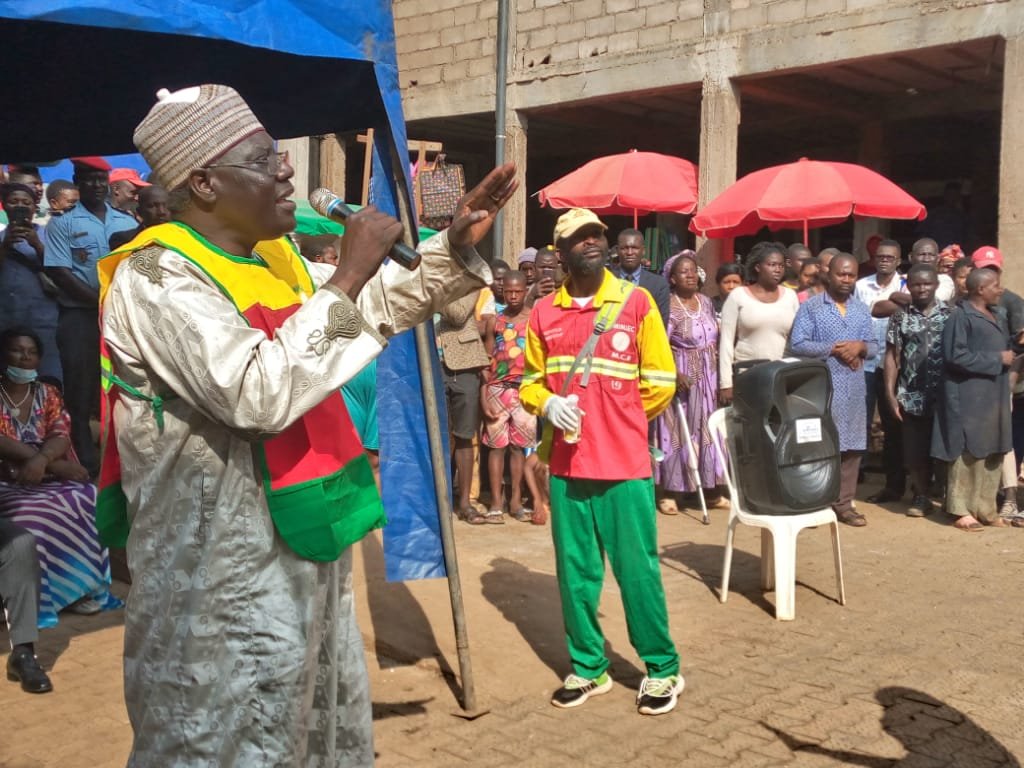 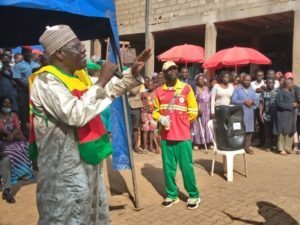 Preaching by the good example as Head of the ministry of youth affairs and civic education, Mounouna Foutsou, laid grounds for the nationwide civic education campaign against the pandemic Coronavirus (COVID-19).

The field sensitization launched officially on March 25, 2020 by Minister Mounouna Foutsou took place in three phases. The first phase and stop-over was at the simbock chieftaincy and Mendong  Market in the Yaounde VI subdivision. The second phase took place at the Tsinga market in the Yaounde II subdivision and the third and last lap was at the Etoudi market in Yaounde I.

At the start of his field trip, the Minister in a simple note advised people to strictly follow the 13 measures of government to fight against the COVID-19.

He said : « I’m here  to let you know that Coronavirus is a reality. The Head of state, H.E Paul Biya is asking you  to respect the measures edicted by the government. Only civic respect can help us move out of this pandemic situation. Do it for you, for your relatives and for Cameroon ».

Alongside youth affairs’ and civic education minister, some heads of health districts were associated to the move. For instance, Dr Lucien Mama, head of the Cité verte health district, on his part exchanged with the mob. He called on the population to respect basic hygiene rules, saying failure to do so, is an open way to the virus.

The same messages were transmitted to people encountered in the different laps of this civic education campaign.

Mounouna Foutsou said : « If we don’t do anything to fight back this virus, we shall all disappear and no one wishes it.».

In a sad note, he outlined the fact that Cameroon is today mourning one of its outstanding son and artist  musician, Manu Dibango due to COVID-19. He said everybody is deeply touched by this lost.

« Dear brothers and sisters, you are not used to see me here at the Etoudi market. If I’m here, it’s simply to tell you that this pandemic is a reality. No more jokes ! » He added. 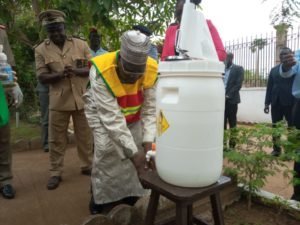 Urban and rural mobile mass animation teams (EMAPUR) and community mediators who are at the heart of this campaign, have been instructed by Mounouna Foutsou to inform the population about the 13 measures laid down by the government. They have to show them the various hygiene methods to scrupulously follow to kick-out coronavirus.

The Minister granted to each group of EMAPUR and community mediators a set of kits composed of hydro-alcoholic solutions for disinfection, loudspeakers to address the public and a circular that contains the 13 edicted measures of government.

To ease communication with people in the ongoing sensitization campaign against COVID-19, humorist, known as Kegue Kegue International was engaged in the course.