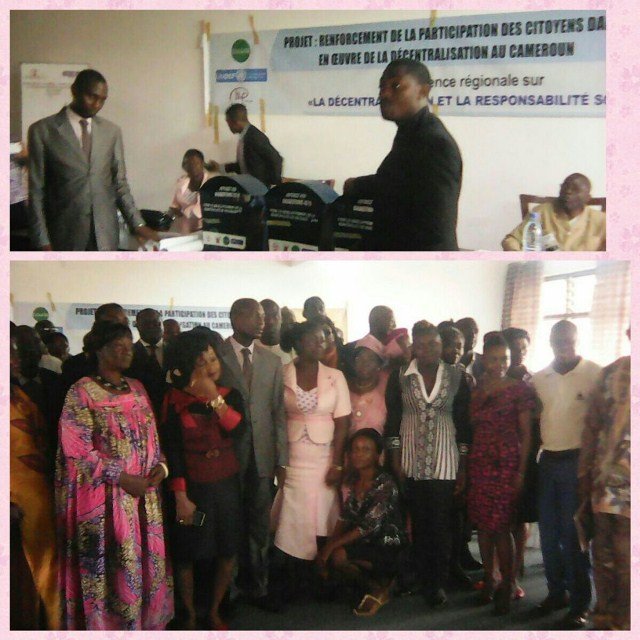 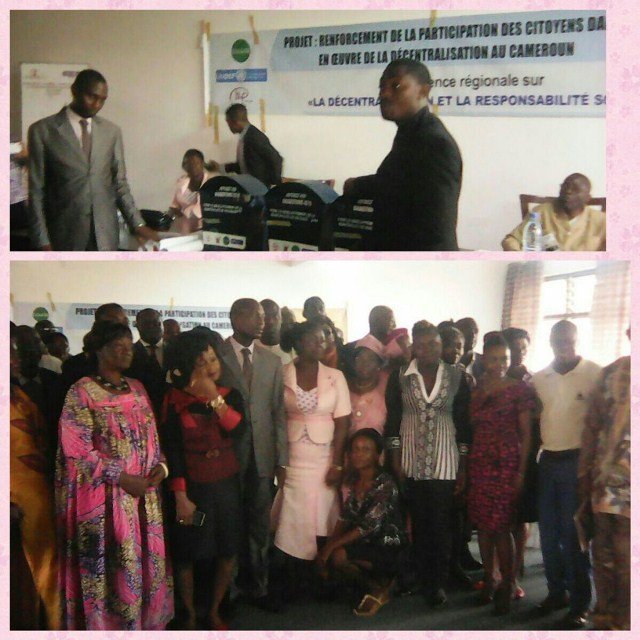 A regional conference to boost the participation of citizens in the decentralisation process in Cameroon was held in Yaounde on Wednesday July 13, 2016.

Women have been urged to actively take part in the electoral process as well as the ongoing decentralisation process in Cameroon. They are key actors in the process but fewly engage. The call was made by the representative of the Yaounde 3 Divisional officer, Honoré Walter Bidjel, while opening the regional conference on the “reinforcement of citizens’ participation in the setting up of Decentralisation in Cameroon”. The nine municipal councillors from the three targeted councils of Yaounde, trained within the framework of this project have exposed on the numerous problems faced with in the course of the implementation of Decentralisation in the country. They oriented the audience and stakeholders present at this conference on the entire notion of Decentralisation and Social accountability. Most of the grievances outlined by these municipal councillors were focused on the slow pace of the decentralisation process, the transfer of resources and competencies by ministries. The Yaounde I deputy mayor, during her presentation on decentralisation pointed out the fact that most of the resources transferred already to councils are weak and do not satisfy the needs with regards to the population’s demands. She said ways and means should be put in place in order to launch a campaign on the notion of decentralisation that will upgrade the understanding of populations.

“Councils deal directly with the population and enter daily in contact with them and are concerned in the first place with their difficulties. They need to be involved and informed in the process step by step”. This was explained by one councillor from Yaounde 2 while outlining hindrances to this process. The problem of access to information was equally brought out by journalists invited at this come together. The fact that some councils notably the lord mayors are not ready to share information with the media is a hindrance to the decentralisation process. Media practitioners are those to approach councillors, senators and other stakeholders in order to exchange and grant the right information to the public.
Several recommendations were discussed in groups and outlined. It was agreed that a forum of exchange and concentrations should be created between senators and other key actors. Participants proposed among others; the setting up of various divisional observatories for the decentralisation process, the elaboration of a list of outputs to facilitate communication in councils and the further implication of youths in this process.
Another high point at this conference was the handing over of suggestion boxes to the councils of Yaounde 1, 2 and 6. The boxes according to the Representative of IVFCam will help populations to actively take part in development of their councils; denounce wrongs, outline complains that will in return impact for a change.
Inter Faith Vision foundation Cameroon (IVFCam) alongside the United Nations Democracy Fund, initiated in 2015 these two year project based in six regions of the country, with each having an association or NGO as lead. Positive Generation (PG) which leads the programme in the Centre region since the start has organised just like other focal points, series of trainings with local chiefs, municipal councillors and media practitioners in order to strengthen the process.