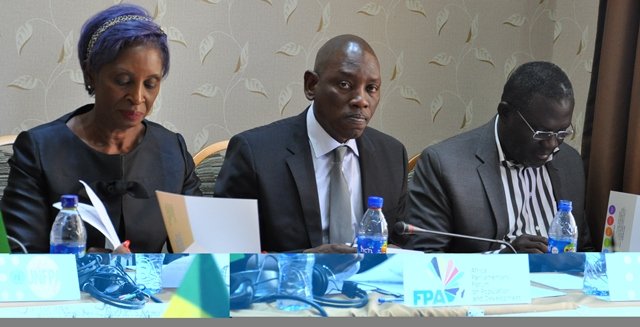 The African Union’s theme for the year 2017 has been devoted to “Harnessing the Demographic Dividend through Investments in the Youth”. A theme that will guide the two ordinary summits of Heads of state and government notably the 28th AU summit taking place in Addis Ababa-Ethiopia on January 30-31, 2017.

There is recognition, in Africa and globally, that investing in young people and empowering them for leadership and effective civic engagement, can contribute positively to the achievement of development outcomes set in Agenda 2063 and Agenda 2030 on Sustainable Development Goals. Both Agendas recognize the critical agency of young people and emphasize inclusivity and broad participation as well as the principle of leaving no-one behind. Reason why youths from various countries have been massively convened to ongoing conferences holding in Addis-Ababa, Ethiopia, on the margins of the 28th AU Heads of state and government summit.

According to the AU, young people below the age of 35 represent more than 65% of Africa’s population and this offers the continent a unique opportunity to leverage its economic, social and political development. The pivotal role of youth in Africa’s development cannot be over stated and governments are increasingly devoting efforts to strategically position youth development issues at the heart of their policies and programs. The commitment to youth led development in Africa has also been expressed at continental level through various policy frameworks including the African Youth Charter and its subsequent Decade Plan of Action that pave the way to the realization of the AU’s Agenda 2063.
Agenda 2063 depicts a vision that can only be achieved if Africa effectively learns from the lessons of the past, builds on progresses now underway and strategically uses all possible opportunities available in the immediate and medium term, so as to ensure positive socioeconomic transformation within the next 50 years.
The demographic dividend discourse calls for improved access to quality education and skills development opportunities, job creation and entrepreneurship, access to health information and services in a peaceful environment guided by good governance.

There is need to continously react and emphasize on investing in family planning issues, young people notably the girchild and young women most often left aside, this will help in the pace of harnessing the demographic dividend as outlined by Lucien Kouakou, Regional Director of the International Planned Parenthood Federation African Region (IPPFAR).
He said : « when the Sexual Reproductive Health and Rights of adolescents and young people are protected, they are better placed to make informed and responsible decisions about their lives ».
He was addressing members of the Forum of African Parliamentarians on Population and Development led by Cameroonian born MP, Honorable Marie Rose Nguini Effa. He equally stressed on the need for African Legislators to increase their commitment towards the implimentation of the African Union Roadmap on harnessing the demographic dividend. Mr Kouakou said the fact that the year 2017 has been devoted to youths, is another occasion to raise voices for more engagement and call our governments to take particular attention in youths issues and put them at the center of decision and policy making. While addressing media practitioners present, he seized the occassion to reiterate the longstanding work of IPPFAR with parliamentarians who are key players in decision making, just as they work with Youth Action Movements, a network of African journalists established over the past years now and several african organisations and associations in order to pas score messages destined to youths. The concept of demographic dividend to him is still new for our populations that is why he called for mediamen to facilitate, domesticate messages related to demographic dividend and channel them to the public for a great impact.

Parliamentarians committed to the cause

« We parliamentarians, our role is to advocate and sensitize our government but most importantly is to make keen attention on the budgets of our countries when passed on in the parliaments. We have to scrutinize allocations granted to youths. What is the budget allocated for education of the youth, the young girl and boy because they are key players in the economic development of a country. In some countries, priority is given to the education of young boys and the girlchild remains at home. This is the occassion for us to sensitize our other peers and governments in laying emphasis not only on the education of the boy but equally on that of the girlchild and youths ».
Speaking on behalf of her peers, the President of the Africa Parliamentary Forum on Population and Development, Honorable Marie Rose Nguini Effa of Cameroon also praised the work of leading organisations such as the AU, UNFPA, IPPFAR and the Japan Trust Fund while acknowledging their continous support to African parliamentarians.
Infact, African parliamentarians have set the pace at their level to champion demographic dividend. The international conference of Parliamentary Networks on Population and development which was held in November 2016 in Dakar, Senegal, presented an opportunity for the Africa Parliamentary Forum on Population and Development to advance the African Union Road map on the demographic dividend. At this crucial conference in Dakar, African parliamentarians showed commitment to support the implimentation of the four pillars of the Road map and leverage the demogarphic transition in their respective countries. It is therefore in this context that the 2017 action plan was developed and to guide African parliamentarians’ efforts to engage towards the achievement of the demographic dividend agenda in the continent. The four pillars of the road map include : Employment and Entrepreneurship, Education and skills development, Health and wellbeing and Rights, Governance and Youth empowerment.