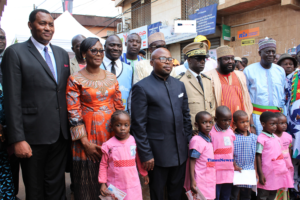 As the national campaign on measles and rubella kicks-off this 4th December 2019, stakeholders are called on to fully participate in the success of vaccination activities.

The role of media practitioners, traditional and religious leaders has been highlighted as vital in the success of the 5 day intensive measles and rubella campaign launched in the country.

The call was made by the Secretary General in the Governor’s office of the Center region in Cameroon. Simon Ghislain Etsil said, the media and community leaders are well placed to easily access people. They have a direct contact with people. They have the power to speak and can help change the mindsets of many who still have stereotypes about vaccins administered to their children.

He said : « vaccins are safe ! They don’t cause infertility and render children crippled as many say on social networks. Let’s vaccinate our babies to be strong and energetic as we are. It is thanks to vaccins that we are in well-being and parents of many children today ».

In his key note address, Dr Phanuel Habimana, resident representative of  the World Health Organization (WHO) said, the role of mediamen such as the association of scientific journalists and communicators for the promotion of health (AJC-PROSANTE) and other associations working with communities should be praised so far thanks to their collaborative efforts. Yet, much is still needed to encourage populations to accept vaccination of routines and free of charge campaigns at their doors. People are called on to warmly welcome vaccination agents. 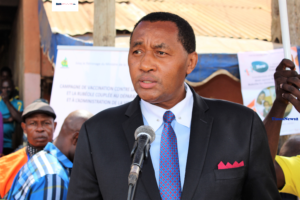 « I encourage all people to mobilize and benefit from this week’s vaccination campaign. Vaccination is free and a right for everyone. As for us, government, partners, civil society, related sectors, together we must work together to defeat measles, polio, and all other vaccine-preventable diseases. All partners reaffirm their commitment to continue supporting the Government of Cameroon in terms of the health and well-being of the people. »

Dr Habimana added that, WHO is more than ever preoccupied by the resurgency of  outbreaks in some regions of Cameroon and in some neighbouring countries like the Democratic Republic of Congo, Chad and the Central African Republic.

The outbreaks have caused alot of death cases estimated to 5000 for instance in the Democratic Republic of Congo. In Cameroon, between 2000 and 2017, the number of deaths of children under 5 attacked by measles decreased from 5208 to 146 thanks to vaccination campaigns. It helped to reduce child deaths by 97%.

The ongoing nationwide campaign equally gives root to the introduction of the second dose of vaccine against rubella and measles for children aged from 9 to 59 months, alongside the administration of vitamin A and deworming with Mebendazole of children aged between 0 and 5 years.