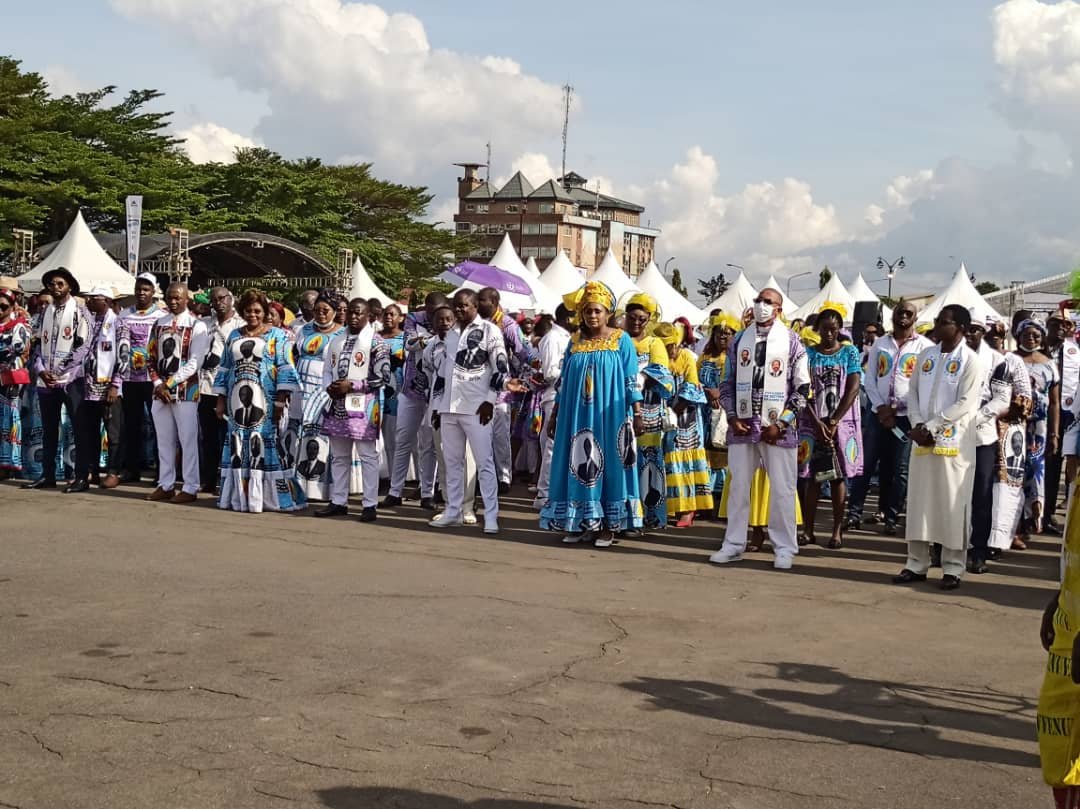 As the permanent Head of the Cameroon People’s Democratic Movement (CPDM) in the Mfoundi Division of the Center region, Gilbert Tsimi Evouna presided over the 39th anniversary that took place on November 6, 2021 at the esplanade of the Yaounde city council.

CPDM’s militants from all the seven sub-divisions that make up the Mfoundi, massively gathered on November 6, 2021 at the esplanade of the Yaounde city council. These celebrations marking Paul Biya’s accession to the magistracy as Head of state in Cameroon were coloured despite the current context plagued by the coronavirus pandemic and the socio-political crises affecting the North West and South-West as well as the Far-North regions.

The 39th anniversary observed by the CPDM militants was placed under the theme: « All united and gathered behind President Paul Biya for the diplomatic, cultural and sporting influence of a Cameroon that is one and indivisible, decentralised and emerging, which guarantees Living together, social peace, territorial Integrity, consolidation of National Unity and accelerated development of our country. »

In the Mfoundi division headed by Gilbert Tsimi Evouna, who is by the way the lead chair in the regional council, many officials were convened in the ceremony.

The Secretary General of the CPDM, Vice- Prime-Minister, Jean Nkuete was the august guest at the festivities which were an open way to express devotion and love for their leader, CPDM national chairman, Paul Biya.

During the ceremony one major key point was that to revisit at all levels the development made during the long journey undertaken since 1982, date at which President Paul Biya acceded at the magistracy.

The permanent Head of the CPDM delegation, Regional council’s President, Gilbert Tsimi Evouna said in his speech that, there is root to rejoice after the long path made and with visible developments recorded in the political, economic and social domains in Cameroon.

Yet, he added that, the path to an emerging and prosperous Cameroon is still long and made up of hindrances.

Militants are therefore called on to accompany by all means their champion in order to achieve his policies of a greater Cameroon as he outlined.

CPDM’s Head in the Mfoundi equally took advantage of this celebration which came just after a long electoral process undertaken nationwide in the ranks of the leading political party, to call for unity, peace and reconciliation.

Gilbert Tsimi Evouna in his key address said there are no more internal battles in the Mfoundi. After the episodes of reorganization of basic organs within the CPDM, militants have reconciled and preach togetherness. He seized the opportunity granted to call for reconciliation between the various protagonists who took part in recent reorganizations of CPDM’s basic organs.

Talking to the press, some CPDM militants and presidents of sections acknowledged the fact that the battles were part of an internal competition and which ended in a fair play mood.

The Yaounde ceremony was equally marked by the official installation of all the heads of the 7 sub-divisions of the CPDM branches besides those of the Women CPDM and the Youth wing of the CPDM. They were officially ushered by Mr. Jean Nkuete and other delegates of the CPDM central committee.

A motion of support was read and all militants rallied and once more praised the actions and clear vision of their champion, Paul Biya, Head of state of Cameroon.