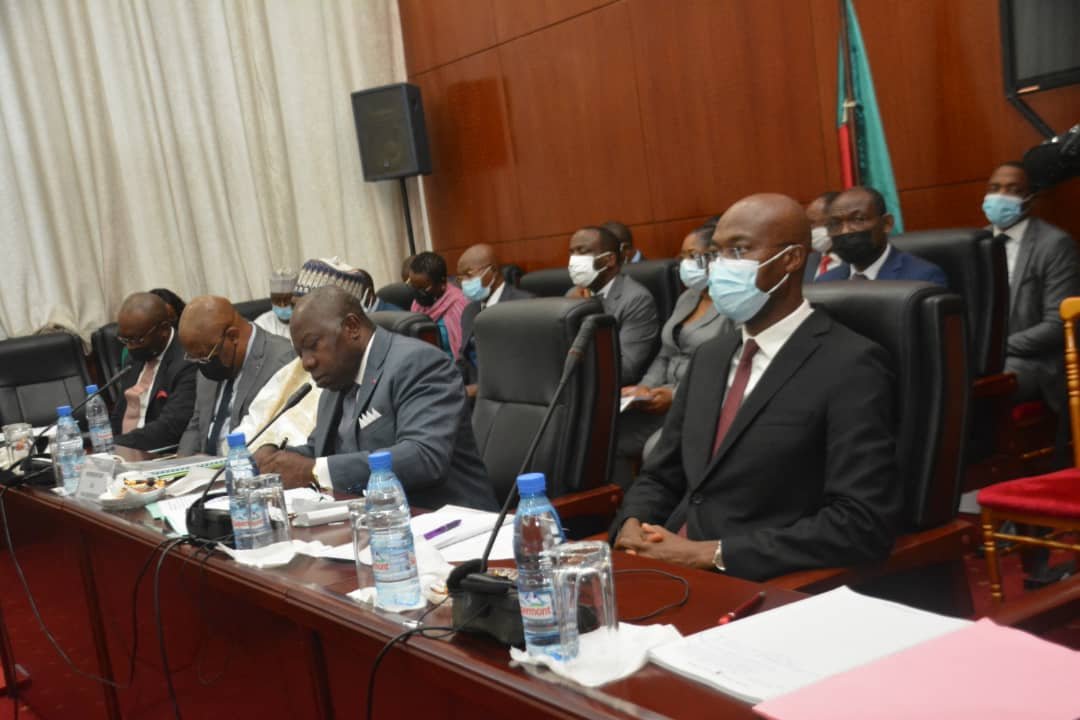 Seven ministers appeared before the finance and budget committee of the national assembly on Monday, 29th November 2021.

President of the finance and budget committee of the national assembly, Rosette Ayayi Moutymbo and team have welcomed on Monday November 29, 2021 another group of seven ministers who came to defend their respective budgetary allocations.

As usual, discussions take place in the presence of the Minister incharge of assemblies, Bolvine Wakata, the Secretary General of the lower house of parliament, Gaston Komba, the Director General of the budget in the ministry of finance, Cyril Alo’o Edou and other officials who are involved in the process. The discussions which enter within the framework of the 2021 November ordinary session of parliament are expected to wrap up with the final adoption of the 2022 state budget standing at 5762.4 Billion FCFA.

On behalf of Minister Alamine Ousmane Mey, the minister delegate to the ministry of economy, planning and regional development outlined the various aspects that will make up the 2022 budget of their ministerial department. Paul Tasong said the 59 Billion FCFA allocate to Minepat will serve in the operationalization plans and programmes of the National Development Strategy (NDS30).

The ministry that is currently managed by Minister Joseph Anderson Le has an envelope of 13.913 Billion FCFA to carry-out its activities for 2022. While presenting key points of his activities, Minister Le said the money will amongst others be used to pursue changes in administrative reforms, the modernization of the public service notably with the SIGIPES and other unachieved works undertaken in the previous years.

“We have the process of accelerating and deepening and we have the process of promoting local development. Meaning that part of this money will help us to practice and put in place the new competencies that are allocated to councils and transferred to regions. It is also to consider that in terms of local development, local authorities, meaning the regions and councils are producing wealth, are attracting people to invest and ameliorating the conditions of our populations…” Minister Elanga Obam said.

Laurent Serge Etoundi Ngoa, Minister of basic education appeared before the finance and budget committee in order to defend an envelope worth 244 Billion FCFA. Priorities in 2022 as outlined by the Minister will be more focused on infrastructural development in the basic education sector. Accent will equally be laid on the recruitment of teachers. In the last three years, close to 9.000 teachers have been recruited.

Pauline Nalova Lyonga said flagship programmes in the ministry of secondary education are vast and many projects are to be undertaken. She defended a budget of 400.2 Billion FCFA.

She said: “As far as technical education is concerned, our technical schools are not functioning properly. Not the way we will them to function because they don’t have equipments and we are going to look at that…”

In the labour and social security department headed by Minister Gregoire Owona, it is an envelope worth 6.8 Billion FCFA that has been disbursed for yearly activities in this ministry. Minister Owona Gregoire said for 2022, his ministry will prioritize the continuous development of social dialogue, training staff delegates in abid to boost dialogue to reality.

On behalf of his counterpart of employment and vocational training, Minister Jules Doret Ndongo defended the budget allocated for the 2022 functioning. The budget of Minefop stands at 21.4 Billion FCFA.