Members of parliament paid last tributes to their comrade, peer and sister Honorable Marinette Ngo Yetna who passed away on May 24, 2021 in Douala.

The funeral ceremony organized on Friday July 2, 2021 by the national assembly was chaired by deputy speaker, Theophile Baoro.

In his address, Honorable Theophile Baoro praised the late female MP whose actions were noticed in the parliament thanks to her devotion and dynamism.

The representative of the CPDM parliamentary Group, Vice President Mary Muyali Meboka said she was a dynamic militant who will be remembered for her illustrious moves.

“During her passage at the national assembly, she illustrated herself by appreciated services as a member of the parliamentary committee on education, vocational training and youth. During plenary sessions, she used to ask pertinent questions to government officials. Her major preoccupation has always been the well-being of her people. Honorable Ngo Yetna who died at the age of 56 has known a very rich political life…” Honorable Mary Muyali Meboka pointed-out.

Honorable François Biba, president of the committee on education, vocational training and youth issues, on his part equally recognized the great support of the late MP as one of the members who achieved a lot through her sense of organization, dynamism and frank speaking.

He said Honorable Marinette Ngo Yetna was a talented writer, poet whom they discovered during the course of their sessions. Honorable Biba added that, she was a woman passionate about life, yet, very open to discussions and critics whenever it appeared. She distinguished herself through her frank speaking and free tongue.

The farewell ceremony held at the conference centre was attended by various government officials and other dignitaries.

Born on the 10th of December 1965 in Logbadjeck village, the CPDM MP of the Sanaga Maritime division, Littoral region of Cameroon was known to be a strong political lead in her constituency. He engaged in politics since 1982 in the former NUC, today CPDM.

The female MP was laid to rest in her native village on Saturday 3rd July 2021. The representative of the house chamber, deputy speaker Theophile Baoro decorated the late female MP for her outstanding work. 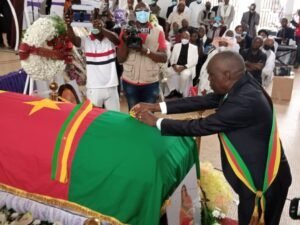